…as Marines are wont to do.  This is a video everyone of every possible political persuasion should watch.  Only two and a half minutes long:

WikiLeaks has still not been approached by the U.S. Senate or House intelligence committees or by the FBI (or any other agency). – WikiLeaks

Is this simply confirmation of my theory that a major power (or faction) is protecting WikiLeaks?  Or something different?

….even a Republican can understand. – AC / Breitbart

Perhaps you’re not aware — SINCE YOU EXEMPTED YOURSELVES FROM OBAMACARE, CONGRESS — but buying or selling health insurance is illegal in America.

Right now, there’s no free market because insurance is insanely regulated not only by Obamacare, but also by the most corrupt organizations in America: state insurance commissions. (I’m talking to you, New York!)

Federal and state laws make it illegal to sell health insurance that doesn’t cover a laughable array of supposedly vital services based on bureaucrats’ medical opinions of which providers have the best lobbyists.

As a result, it’s illegal to sell health insurance that covers any of the medical problems I’d like to insure against. Why can’t the GOP keep Obamacare for the greedy — but make it legal for Ann to buy health insurance?

The fix is so, so simple.  But Democrats and Republicans aren’t interested in fixing the problem.  At best, they’ll just mush the problem around.  But between basic corruption like being bought by drug companies and insurance companies and the more evil corruption of the people who control the government who want to have control over your very life, the problem won’t get fixed.
But all that’s needed is just a regular open market.  That’s it.  If you sell health insurance, you have to sell it directly to the consumer in every state, just like every other insurance company.  Suddenly healthcare becomes $50-$75 a person.

…then this fucking bubble-head will be put in prison.  Evelyn Farkas was an advisor to President Fuckhead and doesn’t seem to understand that she’d be far better off if she kept her mouth shut:

I was urging my former colleagues, and, and frankly speaking the people on the Hill [Democrat politicians], it was more actually aimed at telling the Hill people, get as much information as you can – get as much intelligence as you can – before President Obama leaves the administration.

Because I had a fear that somehow that information would disappear with the senior [Obama] people who left; so it would be hidden away in the bureaucracy, um, that the Trump folks – if they found out HOW we knew what we knew about their, the Trump staff, dealing with Russians – that they would try to compromise those sources and methods; meaning we no longer have access to that intelligence.

So I became very worried because not enough was coming out into the open and I knew that there was more.  We have very good intelligence on Russia; so then I had talked to some of my former colleagues and I knew that they were also trying to help get information to [Democrat politicians].

When she says she was urging her colleagues to “get as much intelligence as you can”, she’s referring to the data they got from spying on the Trump cabinet.  She then outs herself as the source for the NY Times report that discussed Obama officials leaking classified info to the fake news media.  This moron has been freely admitting on other interviews that she and other colleagues from the Obama Admin went to congressional staffers who did not have clearance to see this data and encouraged them to get access to it.

She’s also a senior fellow at the Atlantic Council which is one of the loudest voices among the think tanks in calling for a new cold war with Russia.  And shockingly, Dimitri Alperovitch – the founder and CTO of CrowdStrike is part of the Atlantic Council.

Read the whole thing and make sure you thank Miss Farkas for her stupidity and big mouth.

…if perhaps you’re on the side of the bad guys?  HINT:  When you’re in lock step with Dick Cheney, you’re with the bad guys:

DICK CHENEY: ‘No question’ Russia meddled in the US election, and it could be ‘an act of war’ – Business Insider

Narrowly elected DNC Chairman Tom Perez assumed the post in late February. Immediately after his election, staff were asked to submit their resignations by April 15, according to NBC News.

The report cited “multiple sources familiar with the party’s internal working” when it stated that Leah Daughtry, an adviser to disgraced outgoing chair Donna Brazile, made the request. Brazile has now admitted that while working for CNN during the 2016 presidential election she leaked debate questions to then Democratic nominee Hillary Clinton.

The establishment-wing’s Perez is the party’s third leader within months, as the party attempts to recover from a disastrous 2016 election for the Democrats. More changes are expected in “major staffing and structure changes,” according to the report.

One can only assume that the current staff was not ruthless nor corrupt enough.  Seriously though, for those Progressives with the critical thinking skills to recognize that the Democrats are the enemy, you’re fooling yourself if you think this is a “cleaning out the corruption” move by Perez.  Perez is corruption incarnate.

And to those newly fired DNC staffers, cheer up.  At least you didn’t get fired by the DNC the way Seth Rich was.

Maxine Waters to Trump supporters: “You’re not nearly as patriotic as we are” – Hotair

If there are any Democrats that read this blog, this woman is a literal case study on why the Democrats are hemorrhaging middle America members and have only managed to stay relevant by identity politics and slapping ballots in the hands of immigrants, illegal or otherwise.

Maxine will literally say anything to further her masters’ agenda and in the process, makes the entire Democrat party look every bit as kooky and unhinged as their base wants them to be.  Do you think it’s good for the Democrat party’s ranks when a communist who once wanted to nationalize our oil industry (working out great for Venezuela) accuses Trump supporters of not being patriotic?

….someone else gets it. 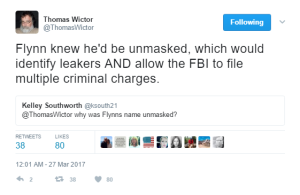 …for the boatload of information.  But there’s no quick way to share this.  Consume as you have time, this may or may not become extremely important.  All depends on if this whistleblower is allowed to speak or is silenced.

A few days ago, the alternative media (real media) picked up on a story regarding FreedomWatch chairman, Larry Klayman and a letter he sent to the House Committee on Intelligence on behalf of a whistleblower named Dennis Montgomery.

Montgomery is a former CIA and NSA contractor who attempted to blow the whistle on illegal spying two years ago through the “appropriate” channels.  He was politely told to go fuck himself by his superiors in the NSA and CIA.  He is in extremely poor health and has been given immunity by Assistant U.S. Attorney Deborah Curtis:

Under grants of immunity, which I obtained through Assistant U.S. Attorney Deborah Curtis, Montgomery produced the hard drives and later was interviewed under oath in a secure room at the FBI Field Office in the District of Columbia. There he laid out how persons like then-businessman Donald Trump were illegally spied upon by Clapper, Brennan, and the spy agencies of the Obama administration.

Montgomery left the NSA and CIA with 47 hard drives and over 600 million pages of information, much of which is classified, and sought to come forward legally as a whistleblower to appropriate government entities, including congressional intelligence committees, to expose that the spy agencies were engaged for years in systematic illegal surveillance on prominent Americans, including the chief justice of the Supreme Court, other justices, 156 judges, prominent businessmen such as Donald Trump, and even yours truly. Working side by side with Obama’s former Director of National Intelligence (DIA), James Clapper, and Obama’s former Director of the CIA, John Brennan, Montgomery witnessed “up close and personal” this “Orwellian Big Brother” intrusion on privacy, likely for potential coercion, blackmail or other nefarious purposes.

He even claimed that these spy agencies had manipulated voting in Florida during the 2008 presidential election, which illegal tampering resulted in helping Obama to win the White House.

SoundCloud links to play the audio in your web browser:

I saw this story when it broke a few days ago and despite its importance, it somehow slipped my mind.

Lee Stranahan is/was an excellent reporter for Breitbart news.  The guy is old school.  He digs, he fights, he reports honestly or he won’t report at all.  This has led to Lee butting heads with his bosses and that happened last week.

Lee correctly states in a recent video that “the fact that the DNC refused to allow the FBI to investigate the servers that they (the DNC) claimed were hacked by the Russians is the biggest political story in the world right now.”

Think about that.  The genesis of the Russian hysteria was the supposedly hacked DNC servers.  But they refused to allow the FBI to perform an analysis, instead preferring to allow a DNC-linked technical company named “CrowdStrike”.  But perhaps the even bigger story is that the FBI allowed the DNC to keep  the servers AND yet has been willing to draw conclusions and form policy based on the words of a third party (CrowdStrike).

President Trump tweeted about this.  Given the enormity of the story and the fact that President Trump was clearly aware of the story, Stranahan wanted to ask Sean Spicer about the subject at the White House press briefing.  Simple, right?

Except Stranahan was forbidden to go to the White House and ask that question by his boss at Breitbart, Matthew Boyle.  Andrew Breitbart is rolling in his grave.

Oddly, Breitbart News has allowed Stranahan to write about this subject:

Fix Is In: Comey Praised DNC-Hired Cybersecurity Firm Even After Botched Report – Breitbart

and he wrote an excellent timeline that details the events:

So why is Breitbart News allowing Lee to write about this story but not address it with Sean Spicer?  On Breitbart’s website, the story might garner half a million views.  If Stranahan gets to ask his question to Spicer, that visibility expands to 4-5 million people.  More traffic, more notoriety, more money and they further expose an enormous political story.

Things came to a head a day later and Stranahan quit his job at Breitbart.

Not mentioning Boyle, he said Breitbart News management would not allow him to cover White House briefings. “If a decision comes down that doesn’t allow the to do that anymore, I don’t even feel like I really had a choice even though I tried really hard to not have the outcome be what it is,” he said. “If I don’t feel like I can do my best work there, it’s time to go.”

The biggest political story in the country, Stranahan tries to blow the lid off of it, and his editor won’t let him.  Draw your own conclusions.