I’ve been traveling a lot lately for work and during a break from meetings last week, a colleague of mine and I killed some time by talking politics in a semi-quiet corner of the MGM Grand casino.

He’s a lifelong “eyes open” Democrat. A verbatim snippet of our conversation:

Colleague: You know, I was still considering voting for Obama up until this Benghazi thing but there’s no way I could do it now. I’ve never liked the Republicans-

Me: I hear you there.

Colleague: -but Jesus, are the polls really correct? How can this many people still be supporting Obama? Jesus Christ, I feel like I’m in an alternate reality where everyone has their heads in the sand. How in the HELL can someone vote for the guy after this whole thing?

Me: I guess it’s a lot of things. This President has gone out of his way to divide people in terms of class, race and politics. He’s convinced a lot of Liberals-

Me: Anyway, he’s convinced a lot of the Left that Tea Partiers and Republicans are utter monsters. Something that backfired on him in a big way during the first debate. Once people saw that Romney wasn’t this evil Mr. Burns type character, the polls shifted a LOT. The stupid thing is that he fucking KNEW that Romney wasn’t what he was making him out to be so if he thought just a single step ahead, he’d know that the “real” Romney would be revealed at some point.

Colleague: Plus he got his ass whipped at that debate.. that changed things too.

Me: lol it certainly did.. But I’m getting off track.. So, you’ve got a group of people that have been convinced that anyone right of center is an abject monster. They’ve accepted it and have completely turned off any critical thinking skills or willingness to be persuaded. You’ve got another group in the far left that are basically Communists who hate America, hate the military and genuinely get off on our soldiers being slaughtered.

Colleague: I would have called bullshit on you for that until I saw the Ted Turner interview.

Me: Yep. Then you have a very large group of people on the Left in an echo chamber. They consume news from sources that tells them what they want to hear, something the MSM is doing these days to the point that you might as well just lump them all together and call them Pravda.  More importantly, they’re around people all day, every day that have the same views as they do.  They avoid people that challenge their ideas and when they do run into someone that does, they quickly dismiss them and their opinions as un-informed or absurd or racist or they simply subconsciously deem that person an outsider to their oh so intellectual club.

Colleague: lol yes, even I have to admit that MSNBC goes a bit overboard.

Me: A bit overboard?

Me: I think there’s one thing that you could add to the list that definitely has some effect.. or maybe it’s the primary reason. I honestly don’t know how much of a contributor it is-

Colleague: What? I have a call in five minutes.

Me: I read a book a long time ago on evolutionary psychology that touched on voting habits. Specifically in relation to an observation made in many, many psyche studies. We’re basically hardwired for consistency. There’s a lot of theories as to why we evolved with this trait being almost ubiquitous among the human population. But there’s a pretty good case to be made that this hard wiring leads us to picking a party, often the one our parents belonged to and then following that party to the ends of the earth no matter how much it changes.

Look at the Democratic party! It doesn’t even resemble what it looked like back when JFK was president! I hear all the time on MSNBC and other Liberal commentators about how the evil Republicans have moved SO FAR to the right. Their platform is damn near identical to what it was 50 years ago. The ONLY difference now is that you have Tea Partiers that have been elected in the past couple of years that are actually doing what they say they will and work to shrink the size of the Federal Government. Christ, most of these “ultra right wing” Tea Party legislators are left wing when it comes to social issues. At the very least they’re in the mold of Barry Goldwater’s “I might not like what you’re doing but the government has no right to stop you” attitude.

I’m willing to bet that if you could somehow go back in time ten years and poll a group of modern day Dems on today’s Democrat party platform, a majority would blanch at some of the planks. But they never vote for anyone without a “D” next to their name. Yes, some of them will get disenfranchised and they may not even vote. But there’s no way that they’d ever seriously consider voting for a Republican or an Independent under any circumstances. If that’s not hard-wiring, I don’t know what is.

Colleague: I have to go, dude. You should write a book on that consistency hard-wiring/voting idea.

This “man” actually had the gall to say that “We leave nobody behind” today when referring to victims of Sandy. 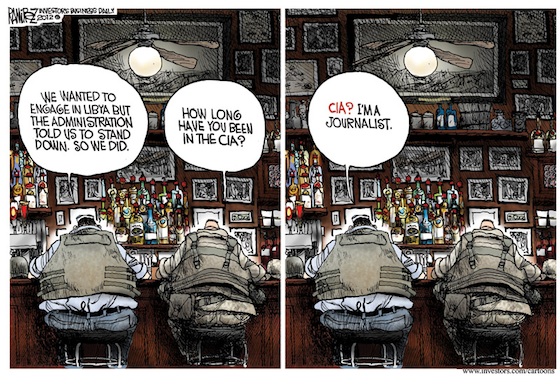 Get ready folks..  The Obama campaign is in full on celebration mode over this storm.  At every turn over the next few days you’ll see the media not talking about the dead Americans in Benghazi.  Instead, you’ll see them talking about what a horrible man Mitt Romney is for wanting to get rid of FEMA and in the background of every report, you’ll see President Obama out there with volunteers talking about how amazing they are for doing what they do.

Sandy was an absolute gift to these thugs.

Very, very weary of all this but I won’t sleep tonight unless I get this out there.  Spoke with one of my sources.

Last night, President Obama flew into Florida but then abruptly cancelled the rally planned for today.

The headline on the article is there in the URL. The White House is saying that Obama is flying back to D.C. because:
“Obama press secretary Jay Carney says the president is returning to the capital Monday to, quote, “monitor the preparations for and early response” to the hurricane.”

The campaign has also cancelled a rally in Green Bay tomorrow for the same stated reason. Ask yourselves if you honestly believe that a man who traveled to Vegas to campaign on the day that an American Ambassador was ass raped and then murdered would cancel two rallies in a (supposedly) close race because of a fucking storm…

While what happened in Benghazi deserves a lengthy post, but you don’t need to have insider knowledge to understand the basics of what happened if you’re actually going to the trouble of going to sites that are actually reporting on the event (since the major news networks wont). Four Americans died because the White House wanted those men dead and the truth with them.

While that might seem like the most treasonous of dirty secrets, the real dirty secret is that THIS IS NOT THE FIRST TIME IT HAS HAPPENED. There have been three other “Benghazis”. The entire military and wetwork elements of the intelligence agencies are apoplectic over the men that this President has left to die.

No, the real goddamn reason that Obama would take the unprecedented step of cancelling campaign stops is because the relationship between the White House and the military is currently a tinder box. Deals must be made, bribes paid and leverage applied in order to bring this fire under control.

This is not speculation.
———————————————-
As an aside, most days as part of my regular reading, I peruse far left leaning sites like Democraticunderground.com, dailykos.com and the George Soros funded mediamatters.com. And yes, I realize that to you Liberal readers, these sites constitute the “mainstream” news.

I could not find a single reference to the Benghazi scandal anywhere on all three sites. Media Matters did have a short article about Benghazi being a vast, right-wing conspiracy. but otherwise not a damn thing. We have become so polarized that a President can sentence four Americans to die and 40% of the country will pretend it didn’t happen.

If you’re planning on voting for Obama, I’d like to know how you deal with this kind of cognitive dissonance. Do you bury your head in the sand and purposefully not read anything about this atrocity? Do you rationalize that it was someone else other than Obama that made the decision to let these men die?  Or do you rely on the old “But but but Bush did x, y and z and he should have been impeached!” in order to convince yourself that you can ethically vote for this man?

Barack Obama can no longer legally win the election.  I suppose I could elaborate on the “legally” but I’m too tired.  The blog has been an exhausting undertaking but it pales in comparison to the weight of the information I’ve had rattling around in my head for the past year.  Especially when one considers that what I’ve posted on here is a small fraction of the sum total.

So, it’s done now.  I’m sure I’ll post about politics again.  At this point in my life, politically speaking, all I care about in a candidate is their affect on our individual liberties.   I want my boy to grow up in the same environment I did and after the last 12 years, that’s no longer possible.  But I’ll keep trying to convince people to push back in part because I’ve realized something important in the past few years about children and politics.

So, I’ll end with this.  If you do not vote for Romney, I don’t blame you a bit.  I don’t believe I will either although I became privy to some new information about two weeks ago that greatly improved my opinion of the man.   Regardless, it’s understandable if you don’t vote for him.  That being said, if you do vote for Barack Obama, you have done one of two things:  a) You willfully remained ignorant.  You failed to do any real research on the man because the idea of a radical change to your worldview was unthinkable.   Or you’re just a damn fool.  Either way, we won’t ever forget.   b) You want a diminished America.  You believe in Marxist ideals.  You’ve never bothered to pick up a history book because if you did, you’d know that the Leftist ideals that our President stands for have resulted in a country caught in the unshakable grip of malaise at best and millions dead at worst.  Once again, we won’t forget.

If you do vote for Romney, vote with your eyes open.  While this man is tailor made to get our economy on track, he will not save us.  This is a man with countless acts of selflessness in his past (most of which will never be known) but who also has some very dark secrets, most of which will probably never be known.  We have to save ourselves.  We will have to fight to get back the freedoms we’ve lost because Romney won’t just hand them back to us.  We’ll have to fight our own fears, to stop being afraid so that people in government can no longer take advantage of that fear.   On the day Romney is inaugurated, you cannot breathe a sigh of relief and then just go back to  your old life.